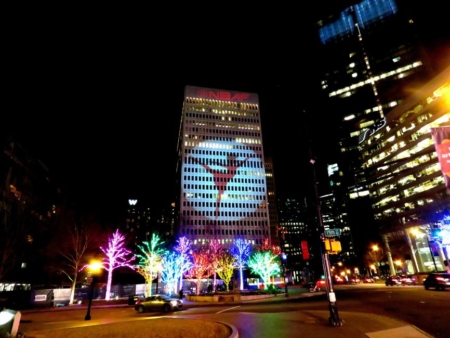 ATLANTA, GA, Feb. 12, 2019
On February 23 the residents of Atlanta and people from near and far celebrated Super Bowl LIII at Mercedez Benz Stadium and not too far away, NBAF celebrated the connection between sports and the arts at Colony Square. Digital images depicting “Art of the Sport” was projected onto the building.

The images appeared nightly between 6 and 11 p.m. The project was supported by the Woodruff Arts Center — just across the street from Colony Square.

The idea was to show the similarities between the two worlds, both of which depend on “passion, coordination, expression, discipline, talent, teamwork and the human body,” according to the festival.

The National Black Arts Festival is an Atlanta-based nonprofit organization that for 30 years has brought the art and the artists of the African diaspora to Atlanta audiences.
READ FULL STORY
CONNECT