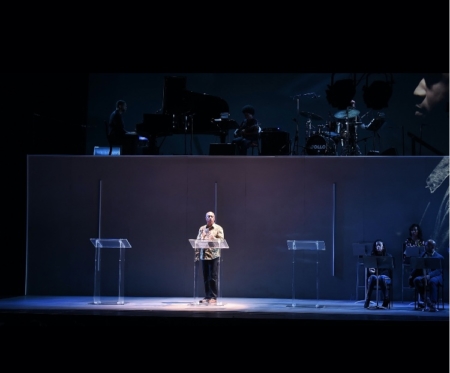 The Apollo Theater and The Collective Culture, (Ronald B. Williams, J. Carter and Erin White), today announced that the Apollo’s critically-acclaimed stage adaptation of Ta-Nehisi Coates’ Between the World and Me is headed to Atlanta. The special presentation, originally developed and directed by Kamilah Forbes, Executive Producer of the Apollo Theater, and featuring original music composed by MacArthur “Genius” Jason Moran and performed live by his trio, had its world premiere at the Apollo in 2018, and will launch its national tour in Atlanta with other stops across the country to be announced. Forbes will join the tour in Atlanta to discuss the continued significance of Between the World and Me and the cultural relevance of the production, the connection between the Apollo, widely considered the epicenter of Black culture, its hometown Harlem, and Atlanta.

On Tuesday, October 22, 2019, the Apollo Theater and The Collective Culture will present Between the World and Me at Atlanta Symphony Hall at 3:00 p.m. and 7:30 p.m. The cast for the show will also feature some prominent Atlantans, to be named at a later date.

The production deepens the conversation about the experience of being Black in America through the eyes and words of Coates. “We are thrilled to bring this Apollo production to Atlanta and to be part of the conversations on a topic that continues to resonate throughout our country,” said Forbes. “We are grateful to work with partners who enable us to share this important work with communities across the country.”

Based on his award-winning book, the theatrical event Between the World and Me, takes difficult, but necessary conversations around Black life and death and places them center stage. A profound work that pivots from the biggest questions around racism and police violence to the most intimate concerns of a father for his son, Between the World and Me offers a powerful framework for understanding our nation’s history and asks: What is it like to inhabit a Black body and find a way to live within it? And how can we all honestly reckon with this fraught history and free ourselves from its burden? Between the World and Me, both the book and the theatrical event, is an eye-opening, emotional look inside these conversations.

Back by popular demand, after sold out runs at the Apollo Theater and Kennedy Center in 2018, this live performance features a cast of actors who bring to life Coates’ words, along with a breathtaking, digital backdrop and music composed and performed live by Jason Moran (Selma, Netflix’s documentary 13th) and his trio, direction by Apollo Executive Producer, Kamilah Forbes (By The Way, Meet Vera Stark; NBC’s The Wiz). Angela Bassett, Common, Black Thought, Joe Morton and Pauletta Washington are just a few of the performers who brought the words of Coates’ critically lauded book to life in the world premiere of Between the World and Me at Harlem’s Apollo Theater.

The production will be remounted at the Apollo Theater October 25-28, 2019. Full casting for all shows will be announced at a later date.

Partners for The Collective Culture’s Presentation of Between the World and Me are: Sundial Brands, Bank of America, Community Foundation for Greater Atlanta and the National Black Arts.
CONNECT